Historian conjures up a bewitching tale of witches, vampires and daemons
By John Orr
February 2011

Deborah Harkness, a professor of history at USC, has conjured a novel called "A Discovery of Witches" that I enjoyed very much.

I liked it for a number of reasons, especially because Harkness writes very well of what it might feel like to be a witch. In this case, a witch who doesn't want to be a witch. 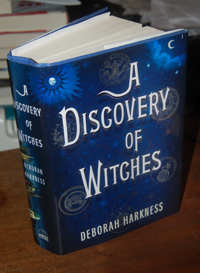 Diana Bishop is a Ph.D. doing research at Oxford something Harkness herself has done), and she finds an ancient book about alchemy:

... I reached out, touching the brown leather. A mild shock made me withdraw my fingers quickly, but not quickly enough. The tingling traveled up my arms, lifting my skin into tiny goose pimples, then spread across my shoulders, tensing the musicles in my back and neck. These sensations quickly receded, but they left behind a hollow feeling of unmet desire. Shaken by my response, I stepped away from the library table.

Bishop's parents had been killed in Africa when she was 7 years old. She'd already been uncomfortable with magic, and after her parents' deaths did all she could to ignore it.

In the case of the enchanted book, she ponders:

Ignore the magic, open the manuscript, and try to read it like a human scholar? Sarah [her aunt] would chortle with delight if she knew my predicament. She had always maintained that my efforts to keep magic at arm's length were futile. But I'd been doing so ever since my parents's funeral. There the witches among the guests had scrutinized me for signs that the Bishop and Proctor blood was in my veins, all the while patting me encouragingly and predicting it was only a matter of time before I took my mother's place in the local coven. Some had whispered their doubts about the wisdom of my parents' decision to marry. "Too much power," they muttered when they thought I wasn't listening.

Bishop can feel when another witch -- or a vampire or a "daemon" -- is looking at her.

Witches aren't the only creatures sharing the world with humans, however. There are also daemons -- creative, artistic creatures who walk a tightrope between madness and genius. "Rock stars and serial killers" was how my aunt described these strange, perplexing beings. And there are vampires, ancient and beautiful, who feed on blood and will charm you utterly if they don't kill you first. When a daemon takes a look, I feel the slight, unnerving pressure of a kiss. But when a vampire stares, it feels cold, focused, and dangerous.

Bishop, who had been getting along well enough in the life academic, mostly ignoring and not often making use of her magic, all of a sudden finds herself surrounded by crowds of witches, daemons and vampires, all of whom are deeply interested in that bewitched book she had found, "Ashmole 782."

Not wanting to mess with the book's powers herself, she'd just sent it back into the Bodleian Library's ancient stacks, where it immediately hid itself -- as it had done for hundreds of years.

All those other witches, daemons and vampires want the book badly, and had been seeking it for all that time, believing it held the secrets of the making of magical creatures.

One vampire in particular gets her notice: "...the most unnerving thing about him was not his physical perfection. It was his feral combination of strength, agility, and keen intelligence that was palpable across the room."

This particular vampire turns out to be Matthew Clairmont, "a professsor of biochemistry and affiliated with Oxford Neuroscience at the John Radcliffe Hospital. Blood and anatomy-two vampire favorites."

Is romance in the air? You bet.

Bishop and Clairmont turn out to be a pretty good team. She is fearless and tough -- having sublimated her magic for years with lots of exercise -- but it helps to have a powerful immortal on your side when one is beset by a lot of cranky, powerful creatures.

And not only is he a guy who knows a lot about killing, having served in every major war fought by humankind in the last thousand years or so, he is a great research source, since he personally knew just about everybody from Shakespeare to Darwin.

He wants "Ashmole 782," but he also wants Bishop. A romance unfolds that is classic in form: Lots of panting, heavy breathing and yearning eyes, but no actual contact of naughty bits. I hate to give away a tingly detail, but if Bishop had been a virgin at the beginning of this book (she was not), she still would be one at the end.

Also, there is yoga.

I mention this by way of explaining that while "A Discovery of Witches" is a book that is intelligently amusing, it also panders to a lot of romantic conventions. Which is fine.

Along the course of this tale we meet a lot of magical people in Europe, Diana is kidnapped and tortured, she sleeps a lot, she eats a lot, she is more or less adopted by a family of vampires, then returned to her family in America where we meet more magical creatures, and she and Clairmont begin to deal with the fact that if they were to marry, pretty much all the other witches and vampires in the world will want to hunt them down and kill them. With help from the daemons.

After a while, Bishop gets real about the fact that she can't deny being a witch anymore. In fact, she's going to have to learn to use her power well, or everybody she loves is going to be in a world of hurt.

Harkness has built a very well-realized fantasy world that is fun to explore. She does well at explaining all the characters and offers lots of exciting and fun stuff. I loved Bishop's family home in America, dwelled in for hundreds of years by witches, most of whom are dead but still hanging around as ghosts. The house itself is sentient, creating new rooms when it knows guests are coming, and hiding things it doesn't want found.

I look forward to reading the next two books in what is planned to be a trilogy.