After being well charmed by "A Discovery of Witches," the first in Deborah Harkness' planned "All Souls" trilogy, I eagerly awaited book two, "Shadow of Night."

And while "Shadow of Night" is a fun enough read, it is somewhat disappointing, as it steps too close to the pit of bodice-ripping romance while only partly reinforcing the clever fantasy of the first book.

And it disses Shakespeare. What's up with that? 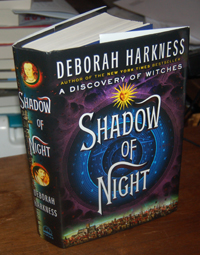 In the first book, Diana Bishop, a Ph.D. historian in the 21st century, is a witch who has been denying her magic for most of her life. Her mother and father were both witches and that's what got them killed when she was 7 years old.

So, she hides her powers as much as she can, and refuses to learn the ancient ways of it — unless she happens to need something that is just out of reach, and if nobody's watching, wills it to fly to her hand. Useful in libraries, where she spends a lot of her time.

But she is studying ancient alchemy, and that work leads her to a book in a library at Oxford called Ashmole 782, which is hugely powerful with magic. And missing a few pages. The book scares her, and she sends it back to the stacks, where it again hides itself, as it has, apparently, for hundreds of years.

Diana and Matthew fall in love, even though unions between witches and vampires are forbidden, and are beset on all sides by attacks. They figure out that somebody needs to teach Diana to be a witch, because she needs her powers to survive, but can't do that in modern times. So they decide to go back in time — one of Diana's powers she can manage, to a degree, is time travel — to 1590, to find a witch who can teach her and maybe dig up Ashmole 782 before those missing pages were torn out.

You can see my review of that book here.

"Shadow of Night" opens with the arrival of Diana and Matthew, married but unconsummated, in 1590.

"My eyes were screwed shut in case we were still in Sarah's hop barn in twenty-first century New York, and not in sixteenth-century Oxfordshire. Even so, the unfamiliar scents told me I was not in my own time or place."

Harkness, who is a historian, has some fun with Diana being a tall, modern woman in her 30s in Elizabethan era England. She is very old, by the ways of those times, when the average woman in her 30s would have already given birth to more than 10 children, most of whom would have died before the age of 5. (A detail remembered from my own college education; it's not mentioned in this book.)

She makes a big deal of Matthew's 1590 friends not being able to clearly understand her when she speaks, because her accent is so different than what is known among English speakers in Elizabethan London. But she never describes the way Matthew's friends speak.

And what friends they are: Christopher Marlowe, described as "a daemon and maker of plays"; Thomas Harriot, "a daemon and astronomer;" Sir Walter Raleigh, "an adventurer"; and a bunch of other people right out of history books, including Queen Elizabeth.

Shakespeare is mentioned, but he's not in Matthew's inner circle, so there is never a scene with him, although he is occasionally mentioned as having been seen by some other character. In the back of the book, Harkness describes him as "a scrivener and forger who also makes plays."

I guess that Harkness may be one of those cynics who don't believe Shakespeare wrote all his own plays and poetry. Over the centuries there have been arguments for and against that idea, with precious little written-down data to support either side.

Except the plays themselves. There is a core of brilliance that shines through all of the work of Shakespeare — even the so-called lesser works — that bespeaks one wise mind.

Harkness is still more a historian than a novelist. She may grow as a writer, and if she does, it is likely that she will become more a fan of Shakespeare.

"Shadow of Night" brings Matthew back to the time when he was a witch-hating tough-guy vampire, instead of the more open-minded man he had become by the 21st century. So he has some explaining to do to all his friends in 1590 about why he has mated with a witch.

Marlowe, especially, who is very jealous. He is clearly besotted with Matthew, which leads to an unanswered question about what sport may have taken place between the two men back in the first 1590.

A search is made for a witch to help Diana, which at first leads to lots of trouble, and a complication arises when some of Matthew's 1590 friends, who were in a city other than Oxfordshire at the time, are confused when the 1590 Matthew just disappears. Time won't allow him to be two bodies in the same time, you see. It's not like "Back to the Future," where Marty sees himself from behind.

Matthew's father (that is, the vampire who made him a vampire) Philippe, demands to see Matthew.

Which is emotional rough sledding for Matthew, who loves Philippe, and who had seen him die in 1944.

But, luckily for Matthew, he has Diana there to help him over the emotional rough parts.

He has a dark and terrible secret, a huge emotional burden that is increased by the need to see his father again.

Diana worms it out of him, exulting, "The last barrier between us fell."

He is a brilliant, thousand-year-old vampire who is schooled in pretty much everything humankind has ever learned, an accomplished doctor, scientist, spy, hero, researcher, businessman. But he is saved by the love of his 21st century modern woman.

Philippe is a great character. He's imperious and unwilling to be anything than what he is - one of the most powerful and influential characters on Earth at the time - but helps Matthew and Diana realize what they are and what they need to be.

This is where Harkness shines: Creating this whole world of vampire characteristics, when blood lust and combat and protection of the mate are all important. And in her creation of witches and witchcraft.

When witches are finally found who can test and teach Diana, it is fascinating. She learns why she can see the threads of light and spirit that tie all things together, and how they can be woven together to accomplish magic.

Ashmole 782 is also found — and it has a terrible, dark secret I will not reveal here.

There are things about this book that annoyed me. But overall, it is a good read, and my hat is off to the Shakespeare-hater, Harkness, for the fascinating reality she has crafted.