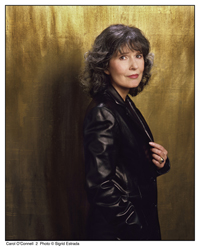 Sigrid Estrada
Carol O'Connell writes brilliant, involving and meaningful mystery thrillers.
The lost and beautiful child among the rats in New York
'The Chalk Girl' is another in the long line
of brilliant novels by Carol O'Connell
By John Orr
January 2012

"The Chalk Girl" is my new favorite in a long line of mysteries by Carol O'Connell that I have greatly admired and enjoyed.

It is another entry in the ongoing story of Mallory, the New York City Police Department detective who doesn't want anybody using her first name, Kathy. For those who've read most or all of O'Connell's books about Mallory, this book advances the enigmatic woman's character in subtle but important ways. 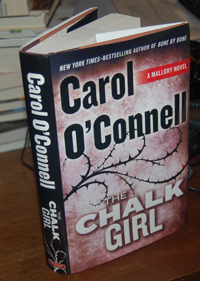 For those who are new to Mallory, "The Chalk Girl" has everything you need to know.

Mallory is one of the great characters ever in detective fiction. She's tall, beautiful, scary smart and ... just plain scary.

Fear is one of Mallory's tools, and the ability to make people think she is sociopathic and crazy. Even her friends who love her wonder if she really is "Mallory the Machine," a psycho with no heart.

And that's part of O'Connell's brilliance as a novelist. Literateurs might argue that "The Chalk Girl" is merely a mystery, not a novel, because the academics describe a novel as having a protagonist who learns something about himself/herself over the course of the book.

In this outing, if Mallory does learn something about herself (and maybe she does), she keeps it to herself. It is her friends, especially the psychologist Charles Butler, who has been hopelessly in love with her for years, and to a lesser degree her partner, Det. Riker, and her late adopted father's poker-playing pals — who all also love Mallory — who have lessons to learn.

Not that O'Connell would ever admit that her novels are literature. Some months ago I received email from a "literature student" who wanted to get in touch with her to thank her for her "contribution to the literary world."

I forwarded the note to O'Connell, who asked me to respond with a nice note, and added, "My big fear is that, if this guy puts out the rumor that I'm writing literature, my publisher will cut my advances in half."

"The Chalk Girl" is a mystery thriller with something on its mind: Abused, raped and murdered children.

There are other good authors out there who write well about crimes against children — Lisa Gardner certainly comes to mind — but O'Connell's approach has some kind of special beauty about it. Sure, bad things happen to children in her stories, but a theme in O'Connell is that these kids (mostly) are survivors. They deal with it. They don't let it stop them.

Also, O'Connell's writing is levels above most thriller writers. There is more poetic substance to what she does.

Mallory herself was a lost child. My favorite of the stories talking about her childhood is "Crime School," from 2002, in which the young Mallory dials a partial phone number (all she has), filling in the missing numbers randomly, and whenever a feminine voice answered, says "It's Kathy. I'm lost."

She is helped by a series of people, but had already picked up some impressive survival skills from living in the street.

She becomes a New York cop, and it is as a detective she meets a lost girl of "The Chalk Girl."

Mallory is on forced desk duty after her adventures of a previous novel, "Find Me," in which she took off across country in what looks like a Volkswagen but is actually a Porsche frame and engine. She doesn't bother to explain to anybody why she's gone, and leaves a dead body behind in her apartment. She ends up being a hero, of course, but her bosses at the NYPD are still cranky.

In fact, when Lt. Coffey, her boss, calls her into his office, probably to put her back on field duty, "In the darkest region of Jack Coffey's brain, a hobgoblin jumped up and down, screaming, 'Shoot Mallory! Shoot her now!'"

Instead, he sends her out to help find a lost child who'd been spotted by Mrs. Ortega, who is Charles Butler's cleaning lady. She'd seen the child — with blood on her shoulders — in Grand Central Park, at about the same time she was hitting a pervert at a playground with a baseball bat.

The pervert turned out to be a serial killer of children, so the mayor wants to meet with Mrs. Ortega, hoping it will take some attention away from the other big event that happened that day at the park, when a woman had a stroke and died, then was set upon by hundreds of hungry rats.

Mrs. Ortega wants Mallory and Riker on the job, so that's why Coffey folded. They have already determined, from Mrs. Ortega's description, that the little girl, Coco, has Williams syndrome. The physical symptoms are there: a small upturned nose, very wide mouth, full lips, a prominent starburst pattern on her iris. And the social symptoms: offering big smiles and hugs to strangers. Even in New York.

Riker "despaired of finding one little girl in parkland that was miles long, half a mile wide, and filled with a million trees to hide her."

When they find her, she's eating an ice cream cone, Mallory calls her name.

"The tiny girl dropped her cone and ran toward them, laughing and crying, her puny arms outstretched to beg an embrace. The desperation on her dirty little face saddened Riker. A hug might be oxygen to her, the stuff of life itself."

The girl turns out to be completely charming, with a big vocabulary for so young a child, but with the cognitive disfunction seen in some people with Williams syndrome.

The red smears on her blouse she says, are "God's blood." Because it had rained down on her from above.

Which leads to the main mystery of this fascinating book — bodies hanging high in Central Park trees, alive and dead, feeding the rats.

And little Coco is the key to solving that bigger crime, because she's seen whoever has been sticking people in sacks, their ears and mouths plugged, and hanging them in trees.

That mystery involves older crimes of children against children. An exclusive school, children who would grow up to become doctors and lawyers and political leaders, and the horrors they visited upon each other.

One of those children grows up to be Phoebe, who is accompanied by the phantom of a child she'd known in school: "For the entire eleven years of his life, he had been called Ernie. In later years, Phoebe had renamed him Dead Ernest, a pale joke, a poor play on words; being dead earnest had gotten him killed."

O'Connell tells her tale in careful steps: We learn about a boy who is having a hard time at school, being bitten and hurt by other children, a boy whose father wants him to just tough it out. We learn about "The Chalk Girl" — the police outline in a school courtyard where a girl's body had ended up, years ago. We learn of sad secrets.

The investigation leads Mallory and Riker into the ugly world of political corruption in New York, the rarefied air of the extremely rich and powerful.

It also leads to significant cracks and strains in Mallory's relationship with all her friends, men who all love her. The child, Coco, and her welfare, becomes an issue that leads even Charles Butler to stand up to her, which had never happened before.

It's a great read, filled with O'Connell's command of humor, pathos and drama.