Author page for "Someone Dark Has Found Me" 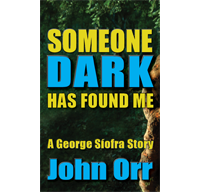 John Orr Photo
University Avenue in Palo Alto, near where Richard Millan's office might be, if it were real. This is in the early a.m.
It's just as we wish life were
John Orr builds a fantasy Palo Alto and populates it with witches, wizards, geniuses and homeless people
By Mark Johnson
September 28, 2013

"Someone Dark Has Found Me" is a fantastic book.

That's not a value judgment. I mean that it's literally fantastic: a flight of mostly pure fantasy set in a town that can handle it — Palo Alto, California.

The plot, synopsized, makes my head spin. As we learn in the first sentence, Deborah Bolting-Macpherson is a witch. She's restarting her life in Palo Alto after the murder of her husband (a wizard, of course) and the death of her arch-evil brother Geoffrey (a more powerful wizard) in London.

She doesn't plan to fall in love again, but she does when George Síofra walks into her life.

George is the right-hand man of brilliant detective Richard Millan. The Millan household is completed by Dexter, Richard's cook. If you're thinking "Nero Wolfe" here, you've spotted one of Orr's affectionate tributes. Richard lives in a square block of Palo Alto that appears to be a hodgepodge of little commercial enterprises but is in fact a formidable secret fortress. Author Orr doesn't confess to an early love of pulp adventure fiction, but I know an influence when I see one.

These heroes are their own men, though. George and Richard are both also novelists. Since this book is subtitled "A George Síofra Story," it's a fair guess that this is an example, and that there will be more. Dexter, not to be outdone, writes best-selling cookbooks, and maybe we'll see one of those someday.

George and Deborah's love at first sight is not unusual in this particular fantasy world. That is how things are done here, and couples stay in love, too. They also kiss a lot more than is seemly. It's just as we wish life were.

But I digress. The key to this plot, naturally, is that things are not as they seem. It slowly becomes clear that Geoffrey's evil did not die with him and that what Deborah thought happened in London was carefully engineered. She has been followed to sunny California by something dark indeed, and she and all around her are in danger of worse than death.

It will take the combined natural powers of the Palo Alto detectives and the supernatural powers of Deborah and her allies — oh, plus the very Silicon Valleyish powers of super-scientist Sebastian Oeschger and a hand from two of the city's homeless — to survive long enough to bring about a final confrontation with a most unnatural villain.

That confrontation is resolved by a surprising realization on the part of one character that changes our view of good and evil in this fantasy world. You'll see what I mean. Author Orr has a big heart.

After the carnage, some sleight-of-hand is necessary with the police, who haven't a clue what's been happening around them but know dead bodies when they see them and are suspicious when those bodies start walking. This is where Richard's silver tongue comes in handy. Just as Nero Wolfe used to be, Richard's an old hand at misdirecting the cops.

If I have to pick a fantasy world to live in, even kissing aside, I might as well pick this one. I'd like that block in Palo Alto, too.

Mark Johnson is a longtime reviewer of books, and former Page-Turners columnist for the San Jose Mercury News.