Buy the DVD at Amazon.com 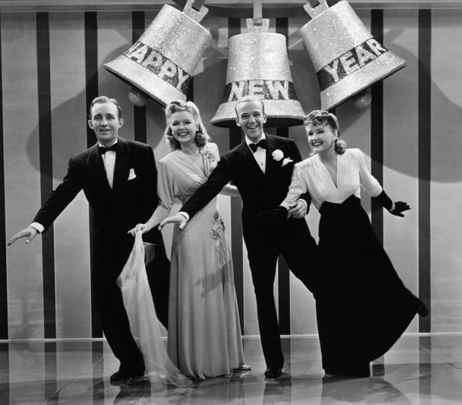 Paramount Pictures
Bing Crosby, Marjorie Reynolds, Fred Astaire and Virginia Dale, from left, in a publicity still from the classic 1942 film, "Holiday Inn."
Take a song-filled trip to 1942
with Bing, Fred in 'Holiday Inn'
Sure, it's dated, but it's charming and has lots
of fabulous music by Irving Berlin
By Carlos deVillalvilla
December 27, 2013

Although not strictly a Christmas movie (Christmas was but one of several holiday sequences), 1942's "Holiday Inn" is remembered as one, and the first appearance on film of the timeless classic, "White Christmas" — which would win an Oscar for Best Song that year — guarantees "Holiday Inn" a place in the annals of Christmas classics.

The lightweight plot concerns a song-and-dance team — Jim Hardy (Bing Crosby), Ted Hanover (Fred Astaire) and Lila Dixon (Virginia Dale). Jim and Lila are preparing to leave the act get married and retire to a farm in Connecticut, but Lila has second thoughts and instead leaves Jim for Ted in order to continue dancing. Jim is heartbroken and follows through with his decision to leave show business for farming.

Farming turns out to be easier said than done, and Jim decides to turn his farm into an inn that is only open on holidays. In order to attract crowds, he hits upon the idea to present entertainment themed around each holiday. Wanna-be entertainer Linda Mason (Marjorie Reynolds) manages to get a try-out and becomes a featured attraction. As the crowds begin to pour in, Ted and Lila are contracted by Jim's agent Danny (Walter Abel), to work at the Inn.

However, it's no longer Ted and Lila — she's left Ted for a Texas oil millionaire. Ted, looking for a partner, decides to come by the inn and is struck by Linda's talent and beauty — but Jim has fallen for Linda too, and goes to extreme lengths to keep Ted from her. However, when Linda discovers what Jim's up to, especially when Ted arranges for a studio honcho to sign him and Linda, she leaves Jim and takes up with Ted, intending to marry him.

Once again Jim is devastated, but even more so. His maid Mamie (Louise Beavers) urges him to go to Hollywood and fight for the woman he loves. Jim resolves to do just that, but is it too late?

Modern audiences may groan at some of the twists and turns, and there's no doubt that the movie is definitely a product of its times. There is an enormous charm about it, however, and you really can't go wrong with Crosby crooning and Astaire dancing up a storm. Those elements elevate any sort of movie. 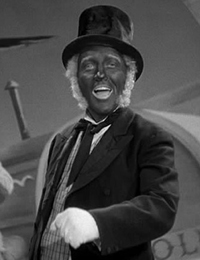 There is a scene in which the performers put on blackface and perform in an idiom which today is considered racially offensive. Some networks, such as AMC, will cut that sequence out. Most of the DVD versions have it in the original form with the blackface scene intact, and Turner Classic Movies, which has a policy not to edit or alter classic movies in any way, airs the movie in its original form.

That aside, this movie remains a heartwarming classic. Some families make it an annual tradition to view this on Christmas day if for no other reason than to hear Crosby crooning the classic "White Christmas" the way it was first seen by the general public — he would go on to sing it in two other movies.