The brilliant musician Gene Lewin was, I could tell, deeply disappointed in me when I interviewed him a couple of years ago, and didn't know who Audra McDonald was.

Hey. I am fairly bright and have been around some, but I don't know everything.

If I spent more time reading the New York papers and the East Coast theater websites, I would have known that Audra McDonald is pretty much as a big a star as Broadway has ever seen, having won five acting Tonys (something only two other people have ever done — Julie Harris and Angela Lansbury), and having starred in some major shows, including "Ragtime," "A Raisin in the Sun," and "Porgy and Bess." If I watched more TV, I would have known she acted on some ABC show called "Private Practice."

But I didn't know those things two years ago, so Mr. Lewin was very disappointed in me.

Now, of course, everybody knows who Ms. McDonald is, because of that show, "The Sound of Music Live!" which happened on NBC on December 5, 2013.

Lucky me, I got to go hear the real Audra McDonald live, at Stanford's Bing Concert Hall, on January 17, 2014, and I'm here to tell ya, Ms. McDonald was great.

As was Mr. Lewin, who plays drums in McDonald's little band. As was the rest of the band, which includes bassist Mark Vanderpoel and pianist and musical director Andy Einhorn.

McDonald actually made me like a couple of things I don't always enjoy, which is academically trained opera singers in concert, and Lieder.

For one thing, she is very charming. She's beautiful, gracious and warm with the audience, and delivers her jokes well. She completed the four-year vocal program at Julliard in only five years, she confides.

For another, especially when she dips into her lower register, she doesn't just sing the songs. She takes each syllable, feeds it with warmth till it knows it is loved, massages it deeply with her gifted larnyx, then lets it roll happily off her tongue into the outside world, where we may all marvel at it.

And regarding Lieder — German art songs — they just never appealed to me.

But the Lieder she chooses aren't old Europeans exercising their creative neuroticisms; instead, she performs songs by Gabriele Kahane, who was born in Venice Beach, California. And you know what they say: You can take the boy out of Venice Beach, but you can't take the Venice Beach out of the boy.

At the fabulous Bing Concert Hall, McDonald sang some of Kahane's "CraigslistLieder," which are actual Craigslist postings he set to music.

"You looked sexy," she sang dramatically, "Even though you were having a seizure. ... I was the guy in the blue shirt holding your legs while that old man put his wallet in your mouth."

Part of the appeal of the performance was that it was a lot more than just a Broadway star standing there and repeating all the songs that made her famous. McDonald performs a challenging, eclectic selection of pop tunes, show tunes, art songs and other bits of vocal fireworks. And she mixes in plenty of downhome charm, talking about growing up in Fresno, and about how her daughter texted her during Mom's big star turn in "Sound of Music Live" to ask where to find the dryer sheets.

She did, of course, offer several nods to Broadway, including to her fave, Stephen Sondheim, performing music from "Into the Woods." Also, "I Could Have Danced All Night," by Lerner and Loewe, from "My Fair Lady," and Irving Berlin and the Gershwin brothers were also noted.

She performed "Can't Stop Talking," by Russell John Fragar, that was hilarious and stunning. She sang in rapid fire, enunciating every syllable as sharp as a tack — it was like a Warner Brothers Looney Tune set to real life — and then the band joined her in singing it. Major chops all around.

Her encore was "Somewhere Over the Rainbow," by Harold Arlen and by E.Y. Harburg, from "The Wizard of Oz."

A dangerous thing to do, because everybody remembers Judy Garland singing it, and Judy Garland owned that song. But ... Ms. Garland shuffled off this mortal coil long ago, so it's nice that Ms. McDonald is here and can sing that beautiful song for us.

This was my first visit to the Bing, which has nothing to do with a contemporary of Judy Garland, but instead was built with a large pile of money donated by Helen and Peter Bing, Stanford class of 1955. Lots of other people also donated.

I found the outside surprising unappealing, although it might look nicer when the trees grow.

But inside, the concert hall itself is magnificent, with 842 seats surrounding the stage space. The sound was what brought the magnificence, with every note ringing pure and true. The stage floor is unvarnished Alaskan yellow cedar — almost as soft as balsa wood, but very resonant. It's meant to vibrate like the back of a violin. The sound is beautiful.

My only real complaint was having to go downstairs to use a bathroom.

McDonald talked about that "Sound of Music Live!" she did for NBC, wherein she was the Mother Abbess who sings, among other songs, "Climb Every Mountain." McDonald noted that a lot of people were pretty "snarky" about the production, which starred Carrie Underwood.

But, as McDonald pointed out, the show provided six weeks of employment to a lot of Broadway people. That's a nice thing, because Broadway people usually don't actually make much money, and TV productions pay much better. And, McDonald noted, the TV people intend to continue doing these live shows.

Well, that is something to applaud. 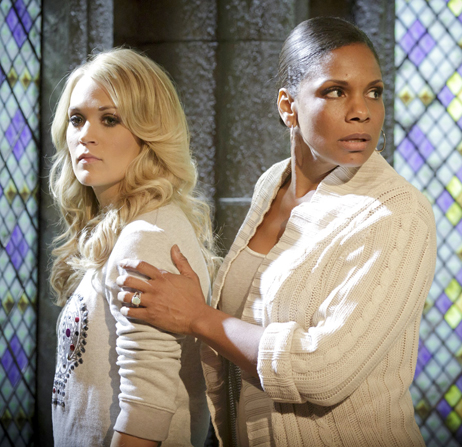