Kathleen Turner has been one of my favorite screen actresses since I first saw her, in the 1981 film noir, "Body Heat," to which she brought both the body and the heat.

Poor Ned Racine (excellent performance by William Hurt) — he never had a chance once Turner, as Matty Walker, steamed up the windows just by looking through them at him. 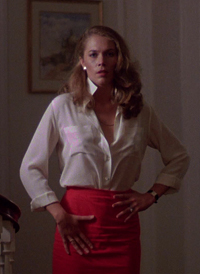 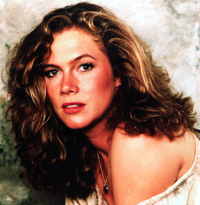 Turner does more with a look, with a subtle change of expression, than most actors can accomplish with their entire repertoire. No knock on other performers, it's just that Turner really brings it.

Her transition moments — from one emotion to another — are poetry, powerful poetry. Her joie de vivre as Joan Wilder, loving the best parts of the adventure and romance in "Romancing the Stone," is indelible. As are her anger at her husband in "The War of the Roses," and her sociopathic psychosis in "Serial Mom."

And while it was fun to see Jessica Rabbit's animated boobs bouncing in "Who Framed Roger Rabbit," it was Turner's husky voice that brought the real seduction.

So, it's thrilling that we get to see the great Kathleen Turner on stage, in "Red Hot Patriot: The Kick-Ass Wit of Molly Ivins," which opened in previews on Friday, and opens officially on Tuesday, with a run planned through January 4, 2015.

In a phone conversation a couple of weeks ago, she sounded disappointed in me when I said I had never seen her on stage, where she has spent a good deal of her time, notably in places I seldom go (New York, Texas) or have never been (London). But she laughed when I said "I never go anywhere. I am kept in a bubble."

"You got a Kathleen Turner laugh all to yourself? Wow," said a friend on Facebook after I posted a short note about the interview.

But Turner, who has done tons of film and television work over the past decades, has accomplished some famous things on the stage, whether I saw her or not.

She was nominated for a Tony as Maggie the Cat in "Cat on a Hot Tin Roof" on Broadway, and when she went to London for "The Graduate," the BBC reported that initially mediocre ticket sales "went through the roof when it was announced that Turner, then aged 45, would appear naked on stage." She repeated that performance in New York when she was 48.

"I get these amazing letters from women about that," she told me. "One woman told me, 'I haven't undressed in front of my husband for 11 years, but tonight I will.'"

These days, in fact, as Turner turns more of her attention to the stage, as an actor, a director and a teacher, she says, "I find I am exploring relationships between women, a relatively unexplored area. ... We have all these preconceived notions about men and women, but how women interact is less explored."

She directed Beth Henley's "Crimes of the Heart" in New York. This year she did "Mother Courage" in Washington — "One of the most difficult and most thrilling things I've ever done" — and "Bakersfield Mist" in London. (She was "dazzling," said one critic, although the play itself, not so much.)

And now she is doing in "Red Hot Patriot: The Kick-Ass Wit of Molly Ivins" at Berkeley Rep, a play she helped develop about one of her friends, the great Texas-based newspaper columnist Molly Ivins.

"She was great, big as they say, a great bold woman with a big laugh and a big smile."

Ivins was one of the sharpest observers of politics in her day, and one of the funniest. As she put it, "Satire is traditionally the weapon of the powerless against the powerful."

Ivins did a stint at the New York Times, where she was not a good fit. For a story about chicken slaughtering in New Mexico, she offered a headline that said "Gang Pluck."

Abe Rosenthal took her to task, saying, "Gang pluck is an allusion to gang fuck. You were trying to get the readers to think of the word fuck" he said.

She was a better fit at the Fort Worth Star-Telegram, from which base her column was eventually syndicated to 400 newspapers.

Ivins called George W. Bush "Shrub," and was a friend of Texas Governor Ann Richards, who was defeated for re-election by Shrub. Richards, by the way, is the woman who, at the 1988 Democratic convention, spoke of Shrub's father, George H. W. Bush: "Poor George, he can't help it. He was born with a silver foot in his mouth."

Ivins wrote, " The thing about democracy, beloveds, is that it is not neat, orderly, or quiet. It requires a certain relish for confusion."

"Molly was a tremendous patriot, and everything she wrote supported that," Turner said. "She believed in doing what was best for the country. ...

The play, "Red Hot Patriot: The Kick-Ass Wit of Molly Ivins," is a character based on Molly Ivins, says Turner, talking about the difference between creating a play and just repeating lines on stage. "She was known for her joie de vivre ... her spirit is enchanting, delicious, coupled with her real passion for right and wrong, for justice. Very compelling ... echoed in myself."

Twin sisters Margaret Engel and Allison Engel wrote the play, starting in 2007, after Ivins' death (inflammatory breast cancer). Turner said Jeffrey Hatcher was brought in to tweak the play. "He helped us a get a little more structure, and we had a play," she said.

"For me," Turner said, "having met Molly sort of cemented my desire to do this piece. I admire her. No past tense."

Turner said she has never gone more than two and a half years without doing stage work.

"I'll tell you, I think I've always had the foresight, and as much as I enjoy it, going in front of the camera probably has some limits ... I've always know there were great, great roles for women in theater."

Turner turned 60 in June, and has suffered since the 1990s with rheumatoid arthritis, which slowed her career quite a bit, and even changed her looks.

"It's extremely painful," she said, but adding that it is, at the moment, in remission. "There is no cure, you know. There is terrific medication that is effective in controlling it — it's an auto-immune disease, the body attacks itself."

She's had twelve operations to correct some of the damage that's been done, and said she will have more operations if needed.

In the meantime, she said she's doing OK.

"Just wait till you see me on stage. I love prancing around in my cowboy boots."