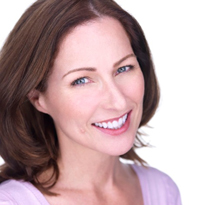 Dines is in "God of Carnage" at this Carmel theater, through July 14. She will also appear in "The 39 Steps," which opens on June 21 to run through July 15, 2012. Visit Pacific Repertory

Visit TheatreWorks, where Dines will be performing in August and September of 2012 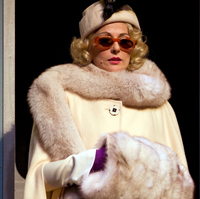 Tracy Martin / TheatreWorks
Rebecca Dines as Lily Garland in "Twentieth Century" in the 2008-2009 season at TheatreWorks. 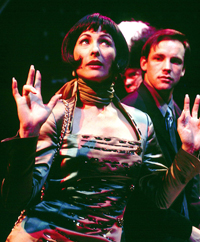 TheatreWorks
Rebecca Dines as the mysterious and alluring Alexa Vere de Vere in "As Bees in Honey Drown" at TheatreWorks Mountain View in August of 1999. With her in this image is Michael DeGood, who became her significant other they met in this show. 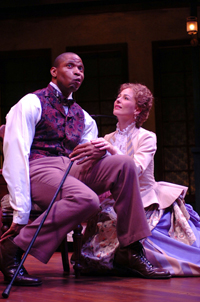 David Allen / TheatreWorks
Rebecca Dines as Mrs. Kendal, right, with Aldo Billingslea as John Merrick in "The Elephant Man" at TheatreWorks in 2007. 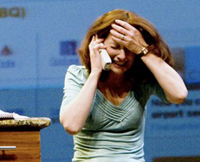 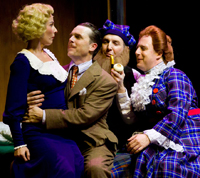 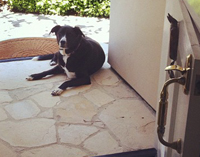 Rebecca Dines
Shelby waits at the door for Rebecca Dines at the guest house where Dines is staying while performing at PacRep in Carmel. 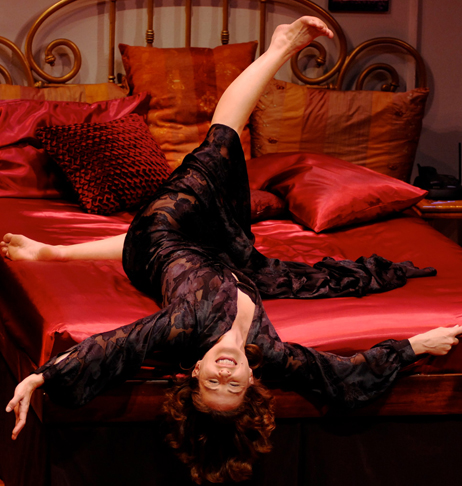 Even for Actors Equity members, the theater life can be rough.

Hardly anybody in theater makes much money, and most Equity members have to do a lot of traveling to tote up their precious 20 weeks of work a year, so they will qualify for health insurance.

But, besides the sheer, life's-blood joy of getting up on a stage and communicating something moving to an audience, sometimes the perqs can be pretty sweet.

Such as for Rebecca Dines, who is in "God of Carnage" at Pacific Repertory Theatre's Circle Theatre, and preparing to open "The 39 Steps" at PacRep's Golden Bough Theatre on Thursday.

When we spoke recently by phone, she was in "The guest house of a lovely mansion in Pebble Beach," she said, and then, a bit ruefully, "Still a charity case. These theaters can't afford to rent your housing."

Bigger companies, such as TheatreWorks on the San Francisco Peninsula, where Dines has appeared many times - and will again, in "Times Stands Still," in August and September - manage to put casts in corporate housing of the sort frequented by tech workers.

But smaller companies, such as PacRep, depend on the largess of patrons.

Such as Blanny Hagenah, a great granddaughter of William Wrigley - "A lovely lady," Dines said. "One of the nicest hostesses of this kind I've had. She's lovely, down-to-earth, a horse woman. She offered to take me to her horse ranch, and show me her Appaloosas."

So, while Dines works the grueling schedule of two plays in repertory, when she isn't on stage, she has comfortable privacy in a nice guest house with two bedrooms, a view of the ocean and of Carmel beach, and is only ten minutes from the theater.

"One day it can be foggy, foggy, foggy. Can't see the ocean. The next day, the sun is sparkling. It's always cool."

Not only that, there is a dog and a cat.

"Sometimes the dog is sitting outside the door. Shelby, who "knocks" on my door every morning because she is training me to give her tummy rubs on command. My little friend, she follows me around. She's a mix, fairly large, about 70 pounds. So sweet.

The dog is a nice touch, because while the guest house might be nice, it's not home.

For Dines, home is a place in Playa del Rey (an ocean-fronted suburb of Los Angeles), she shares with her significant other, Michael DeGood, and their 14-year old Rhodesian ridgeback, Ophelia.

Dines and DeGood met while both were doing "As Bees in Honey Drown," in TheatreWorks' 1999/2000 season.

She was living in the San Francisco area at the time, but when DeGood wanted to move to the "Industry" town - Los Angeles - she went with him. DeGood has a long list of credits in the movie industry, as an actor, writer and editor. Also, he works as a trainer, and has opened his own studio.

"Over the past year and a half, he's added more and more clients," Dines said. "He's doing very well. It's always been something he's been interested in.

"He's one of those awful people who can eat a lot and just burn it off.

"He keeps me off the couch. Instead of lying on the couch eating bon-bons, I've developed an interest in keeping fit. It helps with the pressure of opening and so forth. It's better to be proactive, to be ready for anything."

Last year, for instance, when she was Pamela in "The 39 Steps" at TheatreWorks - one of the two shows she's now doing at PacRep, "It was a vocals challenge for everybody. One lost his voice, one got a terrible cold. I didn't.

"I do a lot of weight training and exercise. I'm more conscious of nutrition. The older I get, the easier it is to falter in a period of pressure."

She was great in "The 39 Steps," just as she has been in a number of other TheatreWorks productions, and shows all over the Bay Area - San Francisco, San Jose, Berkeley - and also in Kansas City (where she did a one-woman show), and in Southern California.

Her theater gypsy ways began with her birth in Australia. Down Under, she competed in things called Eisteddfods, which involve speech, drama and other performances.

She did quite well in them at the age of 11, and an acting career was born.

A career that included, by the way, a year working on the Australian soap opera "Prisoner, Cell Block H," which became something of a cult hit, worldwide.

"Such a contrast between the shows," she said.

In "God of Carnage" she plays Veronica, the part for which Marcia Gay Harden won a Tony.

Initially at PacRep, Dines was to play Annette - the one who vomits, copiously - but director Ken Kelleher asked Dines to be Veronica, instead.

"He calls me the Energizer Bunny," Dines said of Kelleher. "I have a lot of energy on stage - I can be loud and excitable - and that's Veronica. It gets very rowdy."

By French writer and actress Yasmina Reza, "God of Carnage" is about two sets of parents who meet to discuss a playground event at which one child has hurt another.

"Initially, you think it's going to be a lovely, lovely, if awkward meeting," said Dines. "But things go wrong quite quickly. It's very funny. There is a recognition factor for audiences."

Dines had been trying to get into "God of Carnage," somewhere, because "It's actor pie."

When she heard Kelleher was directing a production, she was glad to hear it - she'd worked with him "years ago, at San Jose Stage Company - so I wondered if he remembered me, and sent him a head shot and a resume."

It probably didn't hurt that she'd recently done "The 39 Steps" at TheatreWorks, so was able to step comfortably into that role at PacRep.

For her coming show at TheatreWorks, "Time Stands Still," by Donald Margulies, Dines auditioned via Skype - a webcam set-up.

"I auditioned with Leslie Martinson (TheatreWorks casting director and associate artist, who is directing the show), and she said, this is your reader.

"I was a little worried. I really wanted this part - whenever TheatreWorks announces its season, I pore over it, to see if there are roles for me."

Dines said she was thrilled by her experience with Martinson. "She's very bright, very smart, with a big heart."

Martinson directed "Superior Donuts" not long ago for TheatreWorks, which was a significant success.

In "Time Stands Still," Dines will play, as the TheatreWorks site describes it, "a photojournalist .. thrust homeward by the tides of war, her future wavering between love and liberation, stability and strife."

She will be joined by Mark Anderson Phillips, who was Hannay in "The 39 Steps" at TheatreWorks.

"He's an incredibly versatile, strong, strong actor," said Dines. "The first time I did a play with him was in 'As You Like It,' about 15, 16 years ago -- He's got it. He's committed, passionate, works hard."

That whole "works hard" thing is Dines to a T, and part of why she is looking forward to "Times Stands Still."

"It's the tension-- in one universe, people love her and like her, in another, she's nowhere - it's really hard and hurtful."

Well, she has proven, time and again, she is an actor worth hiring.

"As a younger person, I definitely had to overcome being shy and timid," says the Energizer Bunny. "It's why I got into acting in the first place.

"I am sensitive to certain things - I have an emotional sensitivity - and I apply it, to how I build characters.

"You do grow, you learn - and right alongside as an actor, I sometimes learn as a human being.

"It really is amazing."