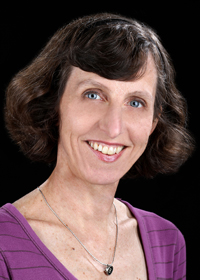 Singer and actress Barbara Heninger.
Preview
"How to Succeed
in Business
Without Really Trying"
Produced by: Foothill Music Theatre
Directed by: Jay Manley
When: July 20 through August 12, 2012
Where: Smithwick Theatre at Foothill College, 12345 El Monte Road, Los Altos Hills. Parking in Student Parking Lot 1, or use Lot 5 for no-stairs access.
Tickets: $10-$28; www.foothillmusicals.com or 650-949-7360 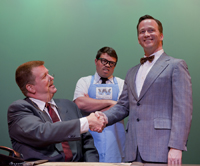 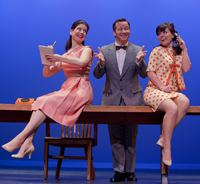 It's no small thing to be an ensemble player in big musicals. 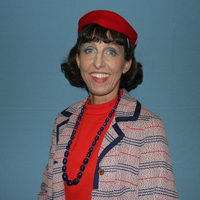 The ensemble actors, singers and dancers don't get their names on the front of the programs or up in lights, yet they still have to put in the dozens or hundreds of hours of rehearsal, have to be on time, have to learn when to be on stage, what to do and say and when to get off, and they have to not make a mistake. An error by someone in the background can screw up a show just as badly as an error by someone up front.

And when not in rehearsal, they go home and practice their lines and scales and work on strengthening their voices, maybe boring their families silly by repeating the same bit of song 300 times in a week.

And when working for troupes such as Foothill Music Theatre, they don't even get paid.

Barbara Heninger, who is part of the ensemble and who plays one of the cleaning ladies in "How to Succeed in Business Without Really Trying," which opens at Foothill Music Theatre on Saturday, explains some of the motivating factors for her.

"I am an incorrigible ham. All my friends will certainly agree."

"You get a chance to be very creative with a whole bunch of people, together. As a tech writer (her day job) you work in teams, but when you're writing, it's you, creating on your own. In a show, it's bigger than any one person."

And for Heninger, who manages a tech-writing department at Synopsis in Mountain View, there is something else: How performing got her through a major scare, when a melanoma popped up on the back of her head.

"I was quite scared. I'd had a bump on the back of my head for about three years. It looked like a cyst. Last summer, my hairdresser said, 'That thing is purple.'"

Still, it took a while for Heninger to get her doctor to look, and to be referred to a dermatologist, who didn't think it was a cancer, but had it cut off anyway, and examined by a pathologist. Who said, yes, it's melanoma.

Well, melanoma kills about 9,000 people a year in the United States, according to the American Cancer Society, so Heninger had reason to worry.

But during that time, when specialists were scanning and poking and prodding and cutting, Heninger was in a show, "Finnian's Rainbow," at South Bay Musical Theatre in Saratoga.

"I feel like it saved my sanity," Heninger said. "I went to dermatology at Stanford and got a check-up - it's looking OK, they didn't see any - but having the theater helps me engage with life, and not sit around and say 'Oh my God, I have cancer, I'm going to die."

Theater, Heninger says, "is just then. You're in the moment, you're sharing it with everyone else, all your energy is focused on what you're doing. It's like zen - you're just caring about that moment.

"If you have things that are worrying you, there is no room for them in that moment."

Partly it's a feeling of being in a community, she says.

"You're all in it together. All the negative things that are stressful, they can leave behind. The audience can do the same."

Heninger had done some theater when she was in high school, then graduated with a degree in journalism from Cal Berkeley, and went into tech writing while her first husband went back to school. She later married Andy Heninger, who is now an engineer at Google. Stepdaughter Nadia just got her Ph.d. from Princeton a year ago. Daughter Maddie Heninger is a student at Foothill College.

When Maddie got out of high school, Heninger said to herself (she reports), "OK, now what do I do?"

And that's when her performance career was revived. She's sung with Schola Cantorum and with West Bay Opera, and has had fun appearing as a series of "goofy old ladies" in various shows, although she is only in her early 50s. She was, for instance, the old lady in a wheelchair who yelled, "Faster, Bialy, faster!" in the excellent production of "The Producers" at Foothill a couple of years ago. And she was various parts in "Anything Goes," also at Foothill -- and various other parts elsewhere.

The show is being directed by Jay Manley, who is a bona fide super hero of the Bay Area musical stage. He takes his students and his volunteers, and maybe shanghais an Equity member or two, and puts on excellent productions that are always audience-pleasers, and sends a lot of improved performers out into the world.

"Jay is a great director," Heninger agrees. "He can manage to get everybody on the stage, and we all have a purpose for being on the stage.

"This one, it works, it's really fast-paced and moves along -- you'll want to see it twice. You'll say, 'Wait! Did I just see that?' It's really funny."