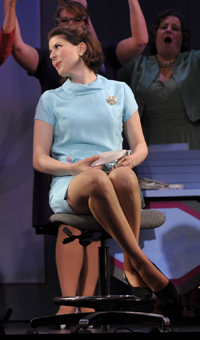 David Allen / Foothill Music Theatre
Corrie Lenn Borris as Rosemary Pilkington in "How to Succeed in Business Without Really Trying." Click on the image to see Katie O'Bryon as Smitty and several members of the ensemble. Be sure to note the blue hand reaching up from the orchestra pit. We like it.
Why I was late

I was a little late to the show because I tried, at first, to park in Lot 5, which is, allegedly, at the same elevation as Smithwick Theatre at Foothill College.

Parking options for the Saturday shows are either Lot 5 and a longish trek, or Lots 1 or 8, and a climb up Cardiac Hill.

I'd sworn to myself that I would never again climb Cardiac Hill, after doing it once to see, I think, "The Producers."

For another show at Smithwick, I'd gone to the Sunday matinee; on Sundays, there is a shuttle bus from Lot 1 to the top of the hill. I like that.

Not available for Saturday evening shows.

So, I tried Lot 5 for the first time, and got completely lost. I should have had a GPS device or something.

I went back to my truck, drove around to Lot 1, and climbed up Cardiac Hill, having maybe a couple of heart attacks on the way up. I am way overweight, and have arthritic knees. Maybe you would sprint up that hill like it was nothing.

But I made it, and am glad I did. The show was worth the effort. 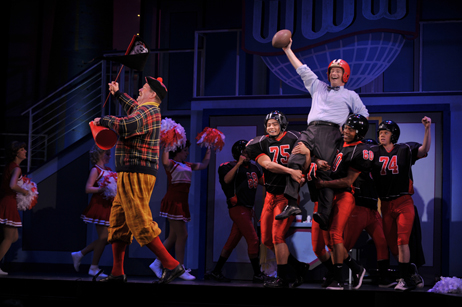 "How to Succeed in Business Without Really Trying" is another in a long line of great shows I've had the good fortune to see there, including "The Producers," "All Shook Up," "Curtains," "Anything Goes" and "The 25th Annual Putnam County Spelling Bee." 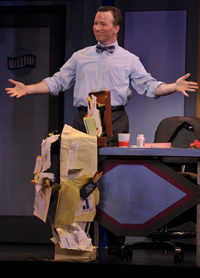 David Allen / Foothill Music Theatre
Michael Rhone as J. Pierrepont Finch in "How to Succeed in Business Without Really Trying," which runs at Foothill Music Theatre through August 12, 2012. Rhone makes the show work -- the audience has to like him, and he gets the audience in his pocket right away. By the way -- a nice detail -- the pocket protector in his fold-out office materials has a World Wide Wickets logo.

I was thinking that there is a kind of magic that happens at Foothill Music Theatre, then a quote attributed to Seneca popped to the front of my mind, slightly edited: "Magic is what happens when preparation meets opportunity."

Well, the real quote is an entirely different sentence that's been twisted in popular culture, especially over the last few decades, and refers to "luck," not magic.

But, I like the idea of magic, and to me, that's what happens at Foothill Music Theatre.

And, the preparation there is astounding.

For years, Jay Manley - excuse me - Dr. Jay Manley was head of the theater department at Foothill College, and the artistic director of Foothill Music Theatre.

Over the years, the extremely gifted Manley has developed a following of actors, singers, dancers and backstage people who not only seem completely devoted to working in Foothill Music Theatre shows, but who are from very good to truly great on stage.

That is very much in view with "How to Succeed in Business Without Really Trying," which put a smile on my face the instant I walked into the theater. (I was a little late, sorry; more on that in the sidebar to your left.)

Michael Rhone is terrific at J. Pierrepont Finch, whose winking smile we must buy immediately for the show to work. And we do. Rhone is charming and funny on stage, and is a fine singer. Finch (who always spells his name to everyone he meets, F-I-N-C-H) is former window-washer who is slavishly following the advice of the book "How to Succeed in Business Without Really Trying" to travel rapidly up the ladder at the World Wide Wicket Company. 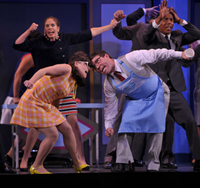 Finch seizes on every opportunity: He walks into the company looking for a job and bumps into its president, J.B. Biggley, who crankily tells him to see his personnel director, Mr. Bratt. Bratt starts to give Finch short shrift, until Finch says he's been sent by Biggley. Finch doesn't lie, but he certainly bends the truth to fit his purpose - and Finch is hired.

Throughout, Finch continues reading his book for advice, which we hear in voiceover - and it's a voice fans of the San Francisco Giants will recognize, Jon Miller, "Voice of the Giants," who announces the games on KNBR and NBC.

Finch also enlists the help of some of the secretaries, notably Rosemary Pilkington, who falls in love with him; Smitty, who wants to help her friend Rosemary; and Miss Jones, who is Biggley's secretary and likes the flower and line of flattery he gives her.

Manley, who directs, has assembled a great cast. Corrie Lenn Borris, who plays Rosemary, has a lovely voice, one that combines sweetness and power, which is a rare combination. She is completely appealing in the role.

Katie O'Bryon is terrific and fun as Smitty. Another great voice, and she and her pointy rimmed 1960s-era glasses make for a hilariously watchable dynamo on stage.

Walter M. Mayes, who is Biggs, has been in countless shows at Foothill and elsewhere, and is always very good, very watchable, but this may be his best performance I've seen. His singing and dancing is fine, but his acting (a sometimes underrated issue in musical comedy) is excellent in this show. He really brings Biggs to life.

David Mister is absolutely hilarious as Bud Frump, the creepy nemesis of Finch who runs to his mother for nepotistic help in the company and who tries every dirty trick he can think of to undermine Finch. Mister was also hilarious in the Foothill Music Theatre production of "The 25th Annual Putnam County Spelling Bee." He gets some of the funniest lines in the show, and delivers them with considerable energy and panache.

There are 43 names listed in the cast. There is never an extra person on stage. Everybody contributes, everybody helps make it a great show.

By the way -- this is another sign of the dedication of the casts to Foothill Music Theatre - at intermission, look at the faces of the ushers who help you to and from your seats. You will recognize some of them from having just been up on the stage, in the ensemble, and will see them there again in the second act.

Hats off musical director Catherine Snider and choreographer Dottie Lester-White. Snider runs a fine ensemble of musicians, and Lester-White has an enormous job in getting so many people in the right places at the right time with so large a cast.

The show itself is kind of fascinating for its links of time and culture.

It began with a satirical book in 1952 by Shepherd Mead. In those days, suspicion about the ways of corporations sort of bubbled along the edges of the intelligentsia. The book became a straight play, then was turned into a musical that opened in 1961 and became one of only eight musicals to win the Pulitzer Prize.

Its ironies can be delicate. For instance, when Rosemary sings "Happy to Keep His Dinner Warm," about her dreams of becoming a suburban housewife supporting her hard-charging businessman husband, it can be seen as what maybe some people thought was the best to which women could aspire in the 1950s. Or maybe it can be seen as a satire that helped lead to the bra-burnings of the 1960s and the ongoing attack of the glass ceiling by women ranging from Hillary Clinton to Marissa Mayer.

That theme is revisited in the funny second act tune, "Cinderella Darling," in which the secretaries join forces to keep Rosemary from giving up on her dream of marrying Finch, who's been ignoring her (or so she thinks).

And it is very weird to see the huge company signs for the World Wide Wicket Company; these days, WWW means world wide web. A funny anachronism.

The show uses Frank Loesser's original arrangements, which are great, although I had grown used to hearing newer arrangements of "I Believe in You," which was probably sung by every pop singer of a certain age in the 1960s and 1970s. The pacing of the song in the show is a little slower than most of the pop re-arrangements. Still, Rhone and ensemble delivered the tune with great charm and cleverness.

It's an excellent show. 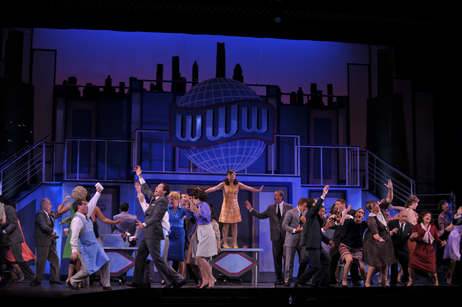 David Allen / Foothill Music Theatre
Katie O'Bryon as Smitty, center, in the hilarious "Coffee Break" number of "How to Succeed in Business Without Really Trying" at Foothill Music Theatre. At far right, just in front of the stairs, is Barbara Heninger, who was profiled in an earlier article in Triviana Arts & Entertainment.