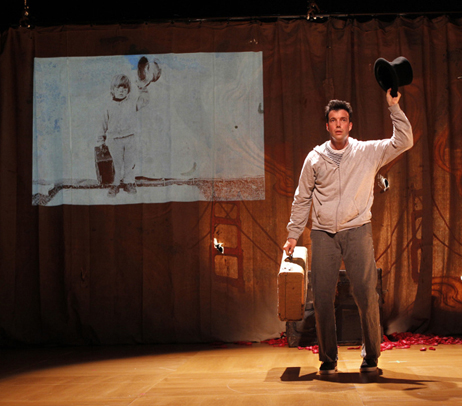 Most sons harbor fond recollections of time spent as youngsters with their dads on fishing trips, attending baseball games or tossing around a football in the backyard.

Not so for Lorenzo Pisoni. His most treasured memories involve being locked in a steamer trunk, which his father then carried around on his back in front of boisterous crowds.

Or, as Pisoni tells it in "Humor Abuse," his one-man show in revival in San Francisco, "Growing up, I spent a lot of time trapped in these trunks. I've been in there, dressed as a gorilla, with three other people -- dressed as gorillas."

"Humor Abuse," now in its second run at the American Conservatory Theater, through August 19, is a smartly woven, fascinating and mostly uproarious blend of circus routines and autobiographical recollections by Pisoni, youngest member of the Bay Area's legendary Pickle Family Circus. Call it a double take.

Speaking of double takes, they were a common activity at the Pickle Family dinner table. As Pisoni recalls, the only way to get dessert was to "out-double-take" his father, Larry Pisoni, one of the co-founders of Pickle. The younger Pisoni, seated at the foot of the sparsely decorated stage at A.C.T., then performs a hilarious bit of double-takery as he relives the memory.

Clowning never ceased, in and out of the Pisoni home. "(Dad) couldn't bring a plate of food to the table without almost dropping it," the younger Pisoni said on a stage containing the circus' original, paint-smeared backdrop, natty pieces of luggage containing juggling batons and balloons, a staircase to nowhere and a false floor. His father would pack a lunch for him every day, containing a gag plastic banana, "and I would return it to him -- every day."

The "abuse" part of the show's title comes from the fact that learning how to clown was a grueling business. After signing a contract to join the circus at the age of 6 as his father's partner -- the "straight man" to dad's clown -- Lorenzo was treated as an equal, learning how to trip on command, fall down stairs and juggle, all of which he performs in comical fashion on the A.C.T. stage.

"I don't want to take away your childhood," Lorenzo recalls his father saying as he waited for his son to sign the papers, "but if you sign, it means you must do every single show." He recalls his father often quipping, "Clowning is serious business."

At the age of 2, Lorenzo had become the youngest member of Pickle, after, of his own volition, he recounts, he walked out on stage during intermission, and attempted to act out the routines he had been rapturously observing. As far back as he can remember, he wanted to be in the spotlight. Lorenzo continued to perform without fail during each subsequent show's intermission.

"I'm serious about being taken seriously," the charismatic Lorenzo said in all seriousness at the Aug. 5 evening performance, dressed in the plain clothes he mostly wears when recounting his childhood, as old Pickle Family photos are cast onto the backdrop. "I was born to be my father's straight man."

However, in no time at all, Lorenzo is wearing a gorilla costume, tap-dancing on top of a trunk. And later, he engages in a long physical bit involving flippers, a ladder and a small metal bucket that brings the house down. "Humor Abuse" lathers into an even-sillier froth when he employs audience members in one of the routines. One audience member refuses to cooperate, and Lorenzo doesn't bat an eye, as if it had all been planned beforehand.

Lorenzo carries himself with such ease and such poise that the audience is in the palm of his hand from the get-go -- when he walks out onto a dark stage in an abdomen-bulging clown tux, after having just apologized for not being funny. He then commences to do battle with a wayward spotlight.

Pickle Family Circus was born in 1974 after the elder Pisoni left the San Francisco Mime Troupe to concentrate solely on making people laugh, without any added social commentary. Troupe designer Peggy Snider, later his wife, and juggling partner Cecil MacKinnon joined him. The Pickles were rounded out by clowns Bill Irwin and Geoff Hoyle. Pickle Family Circus disbanded in 1993.

"Humor Abuse" is ultimately a tale of a father and son, whose relationship lost its way after Lorenzo's parents divorced. His father left the circus, leaving his son to perform routines - and embark on the trials of adolescence -- on his own.

Through the one-man show, helped into fruition by co-creator and director Erica Schmidt, Lorenzo is able to reconcile with his father, in the process resurrecting Larry Pisoni's defunct clown character - which just so happened to be named Lorenzo Pickle. 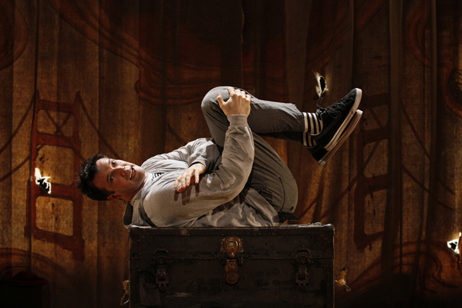