>
Theater
Review
"The Lieutenant of Inishmore"
By Martin McDonagh
Produced by: Palo Alto Players
When: Through July 1
Where:Lucie Stern Theatre, 1305 Middlefield Road, Palo Alto
Tickets: $20-$29; 650-363-8582 or www.paplayers.org
Palo Alto Players bravely stages
'Lieutenant of Inishmore'
Overall, a good production,
although it is a bit light on the blood and gore
By John Orr
June 25, 2012

In a brave bit of programming, Palo Alto Players is offering a pretty good production of Martin McDonagh's bloody black comedy, "The Lieutenant of Inishmore."

There are people who absolutely love this play, which pokes some fun at the Irish Republican Army and its offshoots. I am not one of those people. There is plenty of black, sure — some in the form of senseless killing, gore and dismemberment — but not enough comedy. It is shallow and doesn't make much of a point.

But the production currently onstage at the Lucie Stern Theatre in Palo Alto is mostly a good one, better and worse in various ways, than the production that ran at Berkeley Rep in 2009. 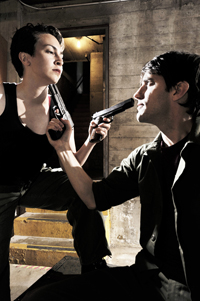 Joyce Goldschmid / Palo Alto Players
Melinda Marks, left, as Mairead, with Jarrod Pirtle as Padraic in the Palo Alto Players production of "The Lieutenant of Inishmore" at Lucie Stern Theatre in Palo Alto through July 1.

Berkeley apparently had more money to put into scenic design — I don't remember a wall shaking like a leaf when a door was closed in Berkeley — but the Palo Alto Players set, by Patrick Klein, is charming and effective enough.

And overall, the cast at Palo Alto Players is as good or better than in the Berkeley staging, although not consistently. There were rough spots.

It is the story of crazy rebel Padraic, who is "too mad" for the IRA, and is in a splinter group of the Irish National Liberation Army. It is 1993, before something like peace finally arose in Ireland.

Mad Padraic is off, presumably blowing up things, when we meet his father, Donny, and a local boy, Davey. Davey brings in a cat with its brains hanging out, and Donny thinks the cat is Wee Thomas, who's been Padraic's only friend for 15 years.

Panic ensues. They both recognize that crazy Padraic will probably kill them both when he finds out his cat is dead.

Meanwhile, Padraic is torturing a fellow who's been selling marijuana to schoolchildren. When that scene opens, Warren Wernick (recently seen in "All Shook Up" at Foothill Music Theatre) is hanging upside down and bleeding from where Padraic has cut off two of his toenails. Played by the handsome Jerrod Pirtle, Padraic is very calmly explaining to James — the dealer — why he must be tortured for selling drugs to fine Irish Catholic children.

He's about to cut off James' nipple when his mobile phone rings. When he learns that Wee Thomas is "feeling poorly" — Donny is afraid to say the cat is dead — he goes nuts and shoots his phone. But he lets James go when he learns that James also has a cat he loves. Wernick, by the way, is very good in the brief appearance. He's really in the role.

The cat brains and bleeding toes are just the start of what ends up as one of the bloodiest plays in history, right up there with the end of "Hamlet" or some of the craziness of "Titus Andronicus."

Not that this production makes the gore work as intended by the play. More on that later.

One of the challenges of this play is that Padraic has to be completely crazy, yet calm about it most of the time. He's committed, he thinks he's doing the good work when he cuts off someone's nipple. Nothing to get excited about. Yet he has to go completely off his hinges when he thinks his cat is sick. Pirtle does a fine job in the role.

A similar challenge is faced by whoever plays Mairead, the crazy 16-year-old girl who is in love with Padraic. At Berkeley, the actress I saw (I think there were two, alternating in the part, I'm not sure) was over-the-top in every moment, which didn't sell well. In this production, Melinda Marks goes too far in the direction of calm madness, and we just think maybe she needs a nap. She chases her brother Davey and shoots him with a BB gun, but she has no energy in that scene at all. Marks perks up some later, and it is always a pleasure to hear her sing "The Patriot Game," which she does several times.

Dan Roach was very good, fun to watch, as Donny, who knows his son is crazy. Roach is that Irish fella of a certain age, resigned to the madness and easing his pain with nips from a bottle. His Irish accent is comfortable. Donny and Davey - who brought in the dead cat - have a long, funny scene when they smear black shoe polish on an orange cat, in a drunken attempt to fool Padraic, whom they know is on his way. Ryan Mardesich as Davey is funny and very into character. The two eat some of the shoe polish, which adds to the level of grossness. Ha! These two actors have to spend a very long time on their knees, hands tied behind them, shoe polish smeared on their faces. Talk about torture.

Acting is like music — ya gotta know the lyrics, and ya gotta be on time. If an actor is clearly thinking about what to do next, and waiting for cues, it can really throw off a performance. This production suffers, occasionally, from that very lack of timing. It hinders the organic flow of conversation.

Probably the sharpest scene was between what theater people call the clowns - the three INLA guys who are on hand to trap and kill Padraic. Troy Johnson as Christy, Henry Nolin as Brendan and Martin Gutfeldt as Joey are pretty sharp in a scene that goes from eating beans to a Mexican standoff, with the three of them pointing guns at each other.

Gutfeldt, in that scene, has probably the sharpest performance of the play. It isn't long, but he's totally in the character, totally on time in responding to the others in the scene.

All of this cast is fun to watch, though, in this very odd play.

Berkeley Rep had it all over the Palo Alto Players when it comes to gore, though.

It's not just cat brains on the stage - people get shot, then dismembered. Berkeley Rep went to great lengths, with buckets of stage blood sloshed around all over the floor and the actors, and very good good fake body parts. It actually helps support the black humor of the play if there is a lot of blood and gore.

At Palo Alto Players, there's never a moment when we don't realize that it's a cat puppet. There's just some red stain on a shirt, not a lake of blood on the stage.

And poor Roach and Mardesich, who are given way too little to do with the body parts for the long final scene. What's Davey supposed to be doing with that severed hand and the axe? Trimming its fingernails? It's just distracting, when it should be disgusting.

Kudos to the cast for doing an overall good job with the Irish accents. They sounded good and could be understood most of the time. Which is more than could be said of a conversation, say, in a real Irish pub.

"The Lieutenant of Inishmore" marks the end of Palo Alto Players' 81st season. Congratulations to this long-lasting company. Still, on the Saturday night I went, there was a very small audience.

The 82nd season, set to launch in September, is to include "Legally Blonde," "You Can't Take It With You," "Looking for Normal," "Miss Saigon" and "Boeing Boeing." A mix of the newish, the not so newish and the old but charming. To investigate the season further, visit www.paplayers.org.