Related events
Audience Exchanges: 2 p.m. Wednesday, July 11 -- After the show, stick around for lively Q&A sessions with the actors and artists who create the work onstage. OUT with A.C.T.: 8 p.m. Wednesday, July 11, following the play.
Open-captioned performance, at 8 p.m. on Saturday, July 21. Special seats have been reserved for hearing-impaired audience members who would like an optimal view of the digital screen. These tickets (located in the Orchestra section) are $34 per person and available by visiting act-sf.org/scottsboro and entering the code CAPTION or by calling A.C.T. at 415-749-2228. 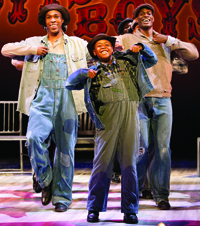 Photo by Henry DiRocco
Featured in "The Scottsboro Boys," from left, are David Bazemore as Olen Montgomery, Nile Bullock as Eugene Williams and Eric Jackson as Clarence Norris. At A.C.T. through July 22, 2012. 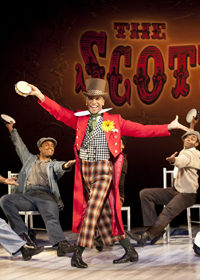 Photo by Henry DiRocco
The use of a minstrel show format caused some fuss in early shows of "The Scottsboro Boys," among people who hadn't actually seen the play. Featured in it are Jared Joseph as Mr. Bones (center) with Shavey Brown as Willie Roberson and Clifton Duncan as Haywood Patterson. At A.C.T. in San Francisco through July 22, 2012. 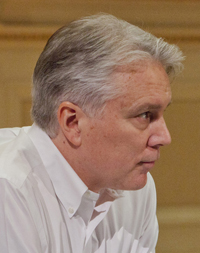 Photo by Michael J. Lutch
Playwright David Thompson. "The Scottsboro Boys," with book by Thompson, is at A.C.T. through July 22, 2012. 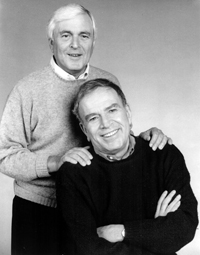 Photo courtesy of The Old Globe
Composer John Kander and lyricist Fred Ebb. "The Scottsboro Boys," with music and lyrics by Kander and Ebb, is at A.C.T. through July 22, 2012. 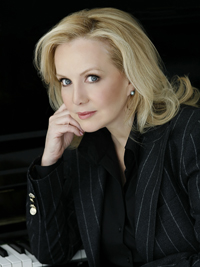 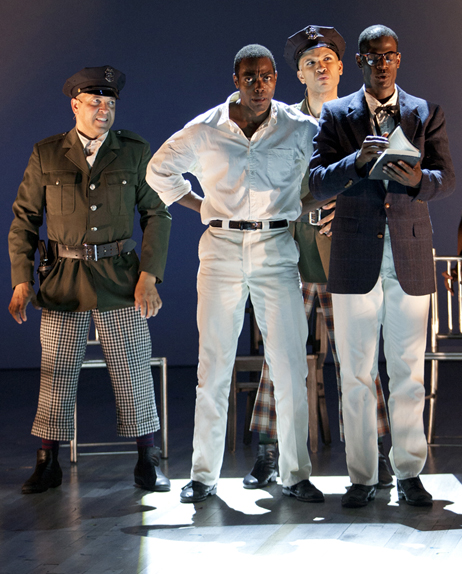 Photo by Henry DiRocco
Featured in "The Scottsboro Boys," from left, are JC Montgomery as Guard Tambo, Clifton Duncan as Haywood Patterson, Jared Joseph as Guard Bones and Eric Jackson as Preacher. On stage at A.C.T. in San Francisco through July 22, 2012.
Not the same old song and dance
'The Scottsboro Boys' uses a minstrel show format
with a heavy dose of irony to tell a sad historical story
By Kevin Kelly
June 22, 2012

In 1931, nine black teenage boys were falsely accused of raping two white girls, after a fight broke out while they were hopping a train to Memphis to look for work. The ensuing court battle would see all but one sentenced to death, even after one of the purported victims recanted her story.

This blatant miscarriage of justice regarding the "Scottsboro Boys," so dubbed after the city in Alabama where the defendants were first tried, provided the first spark to what would eventually become the Civil Rights Movement. It also lit the fire under a musical in 2010 by one of Broadway's most renowned creative teams.

"The Scottsboro Boys," in revival at the American Conservatory Theater in San Francisco through July 22, combines the talents of playwright David Thompson ("Steel Pier," Chicago," "Flora the Red Menace"), songwriters John Kander and Fred Ebb ("Cabaret," "Chicago," "Kiss of the Spider Woman") -- the latter in his last work before his death -- and five-time Tony Award-winning director Susan Stroman ("The Producers," "Young Frankenstein," "Contact"), who is making her A.C.T. debut with this production. Nominated for 12 Tonys, with no win during its original run, the cast will be joined this time around by Hal Linden (of TV's "Barney Miller") in the role of The Interlocutor.

"(We) wanted to do a piece that was real American history," Thompson -- who goes by "Tommy" - said, during a mid-June interview. "As a jumping point, we wanted to look at famous landmark cases of the last century. We had kept stumbling across the Scottsboro Boys' stories. Kantor remembered seeing headlines about them as a kid, then they were gone altogether. It's compelling because it's something that was very passionately felt, and then it just disappeared.

"It's about racism, it's the North vs. the South, it's the emergence of the Communist Party, but what was really interesting was it was just this story about these nine boys. Unwittingly, these nine boys became symbols, but what did they really want? Who were the real (Scottsboro) Boys?"

Thompson said it was important when writing the musical that he was able to identify with the characters and not just the themes. "It's an enormous story," he said. "We wanted to heighten the emotion in the storytelling so it wouldn't just seem like an after-school special."

What sealed the deal was when Thompson read "Scottsboro Boy" by one of defendants, Haywood Patterson, 18 at the time of his arrest. Patterson was tried four times, sentenced to death three times, and served 16 years in various prisons before escaping and going underground. He was re-arrested after the book was released in 1950. He died in prison from complications of cancer at the age of 39, in 1952.

"Here you have a young man who tried in every way he could to tell what happened," Thompson said. "Not only does nobody believe it, but the truth doesn't matter. The way he told the story is so raw and compelling. I thought, 'This is such a powerful character.'"

No strangers to controversy, the form that Kantor, Ebb, Stroman and Thompson chose to tell the tale is about as far as one can get from an after-school special. They turned it into a minstrel show.

"Here you have an art form that is inherently racist ... but from about 1840 until after (World War II), it was the most popular form of entertainment in America; it's rich in heritage and tradition," Thompson said. "Throughout the show, we turn the minstrel form on its head, and by the end, (the characters) reject it completely, because the truth can no longer live in that minstrel show."

In earlier runs, "Scottsboro Boys" met with protests because of its use of the minstrel form, the fact that the creative team consisted entirely of whites, and due to rumors that characters -- all of which, except for The Interlocutor, are portrayed by black actors -- were in blackface.

"There's a moment when we take a nod to (blackface), but it is only to reject it," Thompson said. "Our responsibility is to tell the story honestly and truthfully. We work very carefully with the actors so that we are not telling the story from a white perspective or a black perspective.

"What was interesting about the protests was that when we did (the musical) at the Vineyard (Theatre in New York City) and the Guthrie (Theater in Minneapolis), there was no protest whatsoever." There were only protests later, he said, by people who hadn't seen the musical.

"You couldn't engage in a conversation (with them) because they refused see it. You have to see it before you can have an opinion," Thompson said. However, during a run in Philadelphia, several protesters actually did come to see a performance, "and were so moved, they came backstage to apologize."

Thompson said the creative team never set out to start a conversation with the audience of "Scottsboro Boys," but they quickly discovered "people feel the need to talk about it in a way that is not typical of theater."

"When we started this (musical)," he said, "of course we were always drawn to the underdog story, but Fred would say to us, 'We're going to tell a tough story, but we have to find a way to make it entertaining, because we have to pull the people into the story.'

"Our conversations never got into 'How do we want the audience to react?' We're just storytellers; we're not professors, we're not sociologists," Thompson said with a laugh, quickly adding, "It's not that we can't have our cake and eat it too."