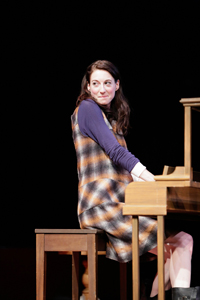 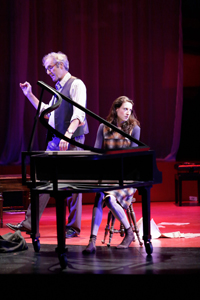 Not being a theater designer myself, I'd never spent much time wondering about why one might choose to use a minimalist approach to stagings and props, as opposed to one of those sets that has every available space filled with furniture, walls and props.

But at the opening night of "Upright Grand" by Laura Schellhardt at TheatreWorks, which has a very simple yet useful set by Kris Stone, a reason for minimalism occurred to me.

The performances by Renata Friedman, Dan Hiatt and Brett Ryback are so powerful that any stage seems overwhelmed by them.

Even with just one real piano, a couple of skeletal, see-through piano shells and a few piano benches scattered here and there, the stage at the Lucie Stern Theatre in Palo Alto seemed at time almost claustrophobic.

There is just so much going on, especially with Friedman, who is mesmerizing and brilliant, that the audience simply wouldn't have any more perceptual room to pay attention to couches or chairs or bookcases.

I was reminded of a production of "The Tempest" I saw decades ago in Los Angeles, with Anthony Hopkins as Prospero. The set, as I remember, was a few things that looked like hassocks, meant to serve as knolls and so forth on the wild island. It worked, because all eyes were on Hopkins, who was amazing. (I read somewhere that he said that production occurred during his drinking years, and he didn't remember anything about it. Too bad for you, Sir Anthony. I'm certainly glad I remember it.)

"Upright Grand" is a brilliant piece of writing about a piano-playing father and his piano-playing daughter. Schellhardt's writing is at a Shakespearean level in the clarity of its vision and its use of humor and pathos. It extracts gales of laughter and floods of tears from the audience.

Ryback, who is excellent as Toady-Tuner-Tutor-Todd and who does almost all of the real piano playing, said in an interview recently that the play "is an exploration of being responsible for talent in the world — but not necessarily your talent, but the talent that is part of a legacy."

And that is the story, in a sense. Pops is a guy who loves music, plays piano in The Broken Man's Bar and comes home to bend his efforts toward composing. His focus is on music. But he has a daughter, Kiddo, who is 12 when he thinks she is 10, and who demands his attention.

"It means you cry for no reason," Kiddo says.

And Pops says, "No, it doesn't, it does NOT, there is always a reason, and generally that reason is your past. And there's nothing wrong with that, are you listening? A sentimental person luxuriates in his past — in the times when he was happier than he is now, when he was braver than he is now, when life was simpler than the rough and tumble of today. He thinks back on those times —"

Pops is gifted in his way, and certainly loves his art. And he loves his wife, whom we only hear about, but never see, and he loves Kiddo. Mom, it becomes obvious, has decided the Kiddo is Pop's child, not hers.

Kiddo turns out to be more gifted at piano than Pops.

It sometimes takes a while for Kiddo to break through Pops' obsession with his own music, but eventually he comes to understand that helping her have her own career is more important than what he might do in his own life.

It's not an easy decision or one without raw and bleeding edges, but it is his gift to her — and to himself, when he has that epiphany. Kiddo grows up to have a brilliant career as a concert pianist. Her own epiphany comes, in a sense, too late, but it definitely means the audience cries for a reason.

Well ... it's a universal truth of parenting, this play. Most parents wrestle with that equation of time spent at work versus time spent helping their children grown and learn. Both are important. For people in the arts, there is the added factor that the job never rests. A creative person must always create; the trick is in learning to be creative about finding time with their children as well.

Hiatt, who was recently at TheatreWorks in "The Pitmen Painters," and before that in "The 39 Steps," and before that in lots of other productions, is completely human and excellent in portraying this man who is focused on his music, but also loves his daughter like a beacon shining in the night. He carries Pops from his 39th to his 63rd year, wrestling all the time with what it means to be a musician and a father. It's a beautiful performance. 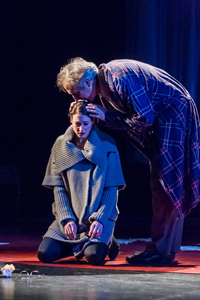 Ryback is very impressive in his several roles, partly because his main role is to do almost all the real piano playing. For Hiatt and Friedman, the challenge is also enormous — to mime playing the music that is really coming from Ryback. Ryback has to play Chopin's "Minute Waltz" as if by a gifted player, and as if by a less gifted player. He was to play like a drunk. He has to play schmaltzy. He has to play brilliantly. And he does. But he's also fun as an actor, bringing real laughs and still invoking thought as the metrosexual, painfully hip and arrogant Tutor.

Hiatt and Friedman do finally play for themselves, at the very end, and it is very moving when they do so.

Friedman as Kiddo is something special, someone for the ages. It's not just her actor's gymnastics in making the audience see her as a playful, smart-alecky 12-year-old who transitions through a difficult adolescence into being an ultra-sophisticated, world-traveling concert star. And all that is, indeed, very impressive. It's that she brings a palpable depth of character and strength to her performance, and is absolutely mesmerizing. Every eye is on her when she is on the stage, because we just don't see this kind of performance every day. She is an astounding talent.

That's why the set had to be minimalist. With those three great performances on stage, there's just no room for anything else.

Hats off to director Merdith McDonough and the rest of the excellent TheatreWorks team for doing such a great job with this play. They wring every drop of meaning and pathos from Schellhardt's fine script. McDonough, who is also the New Works director at TheatreWorks, is taking off after this year's New Works Festival to become associate artistic director of Actor's Theatre of Louisville.

And a special nod to the great William Liberatore, who composed the music for "Upright Grand." He had to devise the notes Ryback would play to mimic a pitchfork slamming through hay, for instance, and a father's drunken growls. Brilliant stuff.